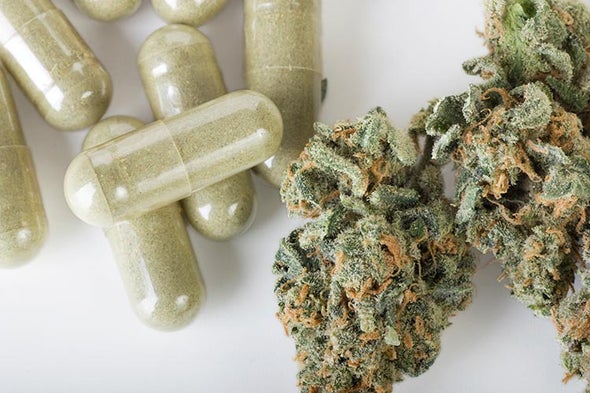 Diana Kwon| Leafly.com
New evidence suggests that a chemical derived from marijuana may be an effective treatment for patients with drug-resistant forms of epilepsy

Stories of cannabis’s abilities to alleviate seizures have been around for about 150 years but interest in medical marijuana has increased sharply in the last decade with the help of legalization campaigns.  Credit: ©iStock

Charlotte Figi, an eight-year-old girl from Colorado with Dravet syndrome, a rare and debilitating form of epilepsy, came into the public eye in 2013 when news broke that medical marijuana was able to do what other drugs could not: dramatically reduce her seizures. Now, new scientific research provides evidence that cannabis may be an effective treatment for a third of epilepsy patients who, like Charlotte, have a treatment-resistant form of the disease.

Last month Orrin Devinsky, a neurologist at New York University Langone Medical Center, and his colleagues across multiple research centers published the results from the largest study to date of a cannabis-based drug for treatment-resistant epilepsy in The Lancet Neurology. The researchers treated 162 patients with an extract of 99 percent cannabidiol (CBD), a nonpsychoactive chemical in marijuana, and monitored them for 12 weeks. This treatment was given as an add-on to the patients’ existing medications and the trial was open-label (everyone knew what they were getting).

The researchers reported the intervention reduced motor seizures at a rate similar to existing drugs (a median of 36.5 percent) and 2 percent of patients became completely seizure free. Additionally, 79 percent of patients reported adverse effects such as sleepiness, diarrhea and fatigue, although only 3 percent dropped out of the study due to adverse events. “I was a little surprised that the overall number of side effects was quite high but it seems like most of them were not enough that the patients had to come off the medication,” says Kevin Chapman, a neurology and pediatric professor at the University of Colorado School of Medicine who was not involved in the study. “I think that [this study] provides some good data to show that it’s relatively safe—the adverse effects were mostly mild and [although] there were serious adverse effects, it’s always hard to know in such a refractory population whether that would have occurred anyway.”

Stories of cannabis’s abilities to alleviate seizures have been around for about 150 years but interest in medical marijuana has increased sharply in the last decade with the help of legalization campaigns. In particular, both patients and scientists have started to focus on the potential benefits of CBD, one of the main compounds in cannabis. Unlike tetrahydrocannabinol (THC), which is responsible for its euphoric effects, CBD does not cause a “high” or pose the same type of risks that researchers have identified for THC, such as addiction and cognitive impairment. Rather, studies have shown that it can act as an anticonvulsant and may even have antipsychotic effects.

The trial led by Devinsky is currently the most robust assessment of CBD’s effect on epilepsy (prior studies included less than 20 patients) but many questions remain. In a subsequent commentary published this January, also in The Lancet Neurology, Kamil Detyniecki and Lawrence Hirsch, neurologists at the Yale University School of Medicine who were not involved in the research, outlined the study’s major limitations, which include possible placebo effects and drug interactions.

Because the trial was open-label and without a control group, a main concern is the placebo effect, which previous studies have shown might be especially strong with marijuana-based products. For example, an earlier 2015 study carried out by Chapman and his group at the University of Colorado revealed that 47 percent of patients whose families had moved to Colorado for cannabis-based epilepsy treatment reported improvement, compared with 22 percent in people who already lived there.

The other major issue is the possibility of drug interactions—because CBD is a potent liver enzyme inhibitor it can increase the concentration of other drugs in the body. This means that when administered with other compounds, consequent effects on patients may be due to the increased exposure to those other drugs rather than the CBD itself.

Despite these limitations, both commentary authors agree the study is an important step in establishing CBD as a safe and effective epilepsy treatment. “This is a first step, and it’s great,” Detyniecki says. Despite the large number of adverse events, he says that overall “there were no surprising side effects—we can conclude that CBD appears to be safe in the short term.”

Evidence suggesting that CBD is effective against treatment-resistant epilepsy may be growing but scientists still know very little about how it works—other than the likelihood that it is “completely different than any other seizure drug we know,” as Devinsky puts it. That’s a good thing, he notes: “One fear is that because of the way that the drugs are tested and screened, we’ve ended up with a lot of ‘me-too’ drugs that are all very similar.”

Researchers, including those who were involved in the study published last December, hope to address these limitations in currently running blind and placebo-controlled clinical trials testing CBD on Dravet sufferers as well as Lennox–Gastaut syndrome, another drug-resistant form of epilepsy. In the meantime most clinicians and researchers, including those involved in the trial, advise “cautious optimism” when considering CBD as an epilepsy treatment.

“I think, based on the evidence that we have, if a child has tried multiple standard drugs and the epilepsy is still severe and impairing quality of life, then the risks of trying CBD are low to modest at best,” Devinksy says. “[But] I do feel it is critical for us as a scientific community to get [more] data.” Cannabis may be the much-needed treatment for a handful of people with epilepsy, but for now, patients should wait for scientists to clear the haze.